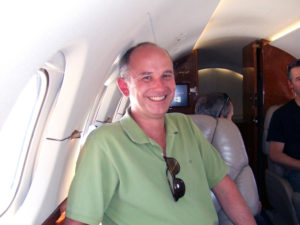 Alastair Nichol passed away peacefully on March 21st after a five month battle with pancreatic cancer. Alastair was born in Berwick-upon-Tweed, Northumberland, England in 1960.

He moved to Kingston, Ontario, Canada at the age of eight with his family, where he lived until he completed his Bachelor’s degree (with honors) in Chemical Engineering at Queen’s University in 1982.

In 2000, Alastair was instrumental in identifying and developing a key acquisition that allowed AEC to establish a US operation, and moved to Denver with several fellow employees to establish the new US office.  Alastair loved EnCana and his colleagues and remained with the company for the rest of his career.

Alastair met his wife Sue at EnCana and they married in 2003 in the Bahamas.  Although she had hardly ever stuck a toe in the ocean because she was sure she would be immediately eaten by sharks, Alastair introduced Sue to scuba diving.  Between the two of them they logged over 2,000 dives in the Cayman Islands, Australia, Turks and Caicos, Bonaire, Mexico and the Bahamas.  Their mutual love of diving led them to purchase a condominium on Seven Mile Beach on Grand Cayman Island in 2006, where they spent as much time as possible enjoying the beautiful Caribbean waters and soaking up the Cayman sun.

Alastair also enjoyed fly-fishing, wood working and painting.  He completed several works of art that combined both artistic skills while battling his illness.

Alastair will be best remembered for his keen intelligence, sharp wit, sense of humor, generosity and big smile.  He did not suffer fools easily and was well known for speaking his mind, often in colorful terms.  He had a wide circle of friends and was an outstanding mentor to many new engineers and other professionals.  He was passionate about his work and loved sharing knowledge and helping others develop and grow in their careers.

Alastair is survived by his wife Sue, his mother and father, Sheila and Ian Nichol, his brother Graham and sister-in-law Elizabeth and their children Mallory and Nathaniel, as well as his sister Joanna Nichol-Fraser, her husband Robert and son Laverne.  Alastair was also incredibly special to and loved by Sue’s family, including her parents Barb and Lou Halsell, sister and brother-in-law Lori and Bill Sandberg, sister and brother-in-law Amy and Danny Tomlinson and Sue’s niece Kelli Johnson and her husband Andrew.

Sue wishes to thank family and friends, including the EnCana family, for their incredible support during a long and grueling five months.   Special gratitude goes to Graham, who dropped everything to come from Seattle when the diagnosis was received and stood by Alastair and Sue through the end.

A celebration of Alastair’s life will be scheduled in the near future.  For those who wish to make a memorial donation, Sue suggests the Wounded American Veterans Experience Scuba (“WAVES”) program, specifically the affiliate program at A-1 Scuba and Travel in Littleton.  To donate click here and put Alastair’s name in the “In Memory Of” box to ensure that your contribution comes to the A-1 program.