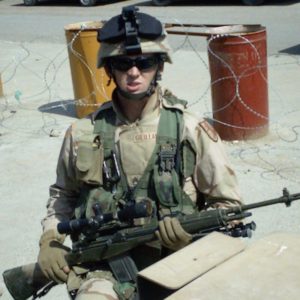 Danny served in the U.S. Army, as a 19K Armor Crewman where he was a tank driver, loader, gunner, tank commander and designated marksman. He served in the National Guard for 2 years and 8 years active duty including serving with Task Force Falcon in Macedonia and in Iraq as part of Operation Iraqi Freedom. Both his maternal and paternal Grandfathers served in the U.S Army Air Corp and his father served in the U.S. Navy Band.

After returning home and qualifying for a VA rating, his wife Liane found an online link to The WAVES Project website and thought it would be something great for Danny. They applied and completed the Open Water Diver course together. They have not stopped diving since and recently worked together to become PADI Divemasters. They are now assisting the WAVES Project with classes helping other Veterans and their buddies start a new underwater journey. Danny has continued his training further by completing the Scientific Diver Course and takes part in our projects conducted with the National Park Service as an underwater mapping, research and conservation diver.

Danny describes his experience as “life changing” He goes on to say “The staff is amazing, very caring and dedicated. They are great divers and great teachers. The camaraderie is amazing and I haven’t been a part of such a great group since I left the Military. Diving does something to me that nothing else does! I get a charge that lasts for 30-60 days. A happiness that brings everything in life; to life!”

His wife Liane agrees, saying “From the very beginning, WAVES treats you as part of the family. From the warm smiles to inviting arms, you always feel welcomed and cared for. The Instructors have patience and make you feel safe and volunteers make it known that you are loved. Diving has made a profound impact in Danny’s life. It has brought enjoyment and excitement as well as the social engagements that have helped to open relationships with others and has really created a new chapter in his life.”

Danny says he has “no specific talent but just a thanks, an appreciation and a debt for life.” Those of us at the WAVES Project, think otherwise; he and Liane have become an integral part of the WAVES family and we are grateful to have them on our team! Danny and Liane have four children; Dylan, Adam, Ryan and Sophia. They hope to get their children involved in diving as well; so far Adam has completed his open water training.

We’d like to extend our thanks to the Gililland family for your service to our country and to the WAVES Project!